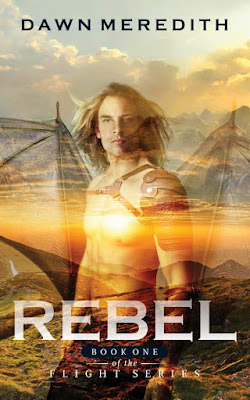 New Book!
One of our members, Dawn Meredith, has released a new young adult book, Rebel, (book one of her Flight trilogy), published by Shooting Star Press.
So what's it about?
A young rebel is called upon to lead… with a broken wing and absolutely no idea what he is doing.

A wounded flying hero struggling to accept his destiny, a shy girl of dark, mysterious secrets unaware of the power within her and a lonely youth out to prove himself worthy of his warrior father. A race with dragon DNA suffer under malevolent overlords, dreaming of a hero to set them free. But what they get is a handsome young joker more interested in breaking the rules than breaking free his people.

Book signing and purchase!
There will be a book signing in Ulverstone on September 19th at 27 King Edward St, Ulverstone, 10am -1pm. All her other titles for children will be available on the day as well. Hope to see you there!

For more details of Dawn's other books for kids click here: